I know you guys missed me, Real Climate sure did. Eric Steig has written a letter to “The Guardian” (booming voice) in response to a Nic Lewis letter patiently explaining problems in an article written by yet-another-know-nothing with a keyboard.  Unfortunately for us, the article itself has been updated in response so we can’t read the original.  What is interesting about the exchange is Dr. Steig’s wild reply.

Nicholas Lewis (Letters, 28 August) complained that your report (Arctic ice
melt likely to break record, 24 August) gave the impression that typical
temperatures in Antarctica have risen as much as on the Antarctic peninsula.
While he is correct about this, his letter also refers to an outdated study
of his, which argued that previous estimates of overall Antarctic warming
were too high. In fact, the work of Lewis and co-authors has been proven
wrong.

The relevant paper here is Orsi et al, Geophysical Research Letters, vol.
39, 2012, which shows that the rate of warming in west Antarctica is as
great, or greater, than what we showed in our original work (Steig et al,
Nature, vol. 457, 2009). Moreover, Lewis’s own paper shows there has been
significant warming in west Antarctica and that the average trend over
Antarctica is of warming, not cooling as is often stated.

The reality is that the Antarctic is warming up and is contributing
significantly to sea level rise; and that there is strong potential for a
greater contribution to sea level rise from Antarctica in the future.
Professor Eric Steig
University of Washington, Seattle, USA

Our 2010  study is now outdated???
Seriously!!  This absolutely is the doctor who never learned about matlab.
For those who have not read the history of the Antarctic wars, here is a pictorial summary.

Steig said this on the cover of Nature magazine: 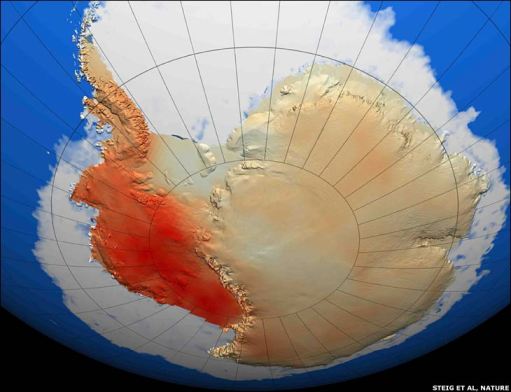 We said, no you screwed up the math so using the same data it is more like this:  (Ryan O’Donnel) 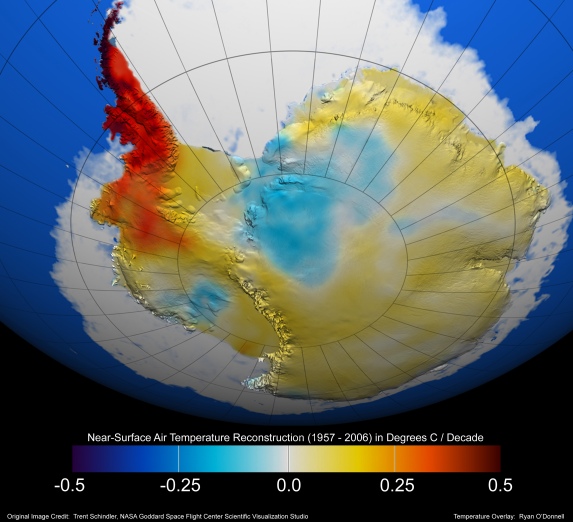 Because without the satellites the temperature stations alone say this: 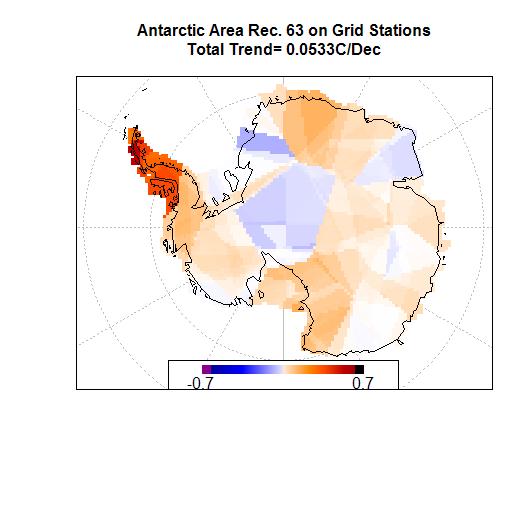 So it absolutely cannot be the image on the right:

Steig 09 smeared the peninsula warming across the continent (see how it is missing from the peninsula on the left), but now he says O10 has been “proven” wrong.  This tells me that he has apparently never understood that  the result we produced is nothing more than thermometer data.   That is all it is.

Temperatures as reported by thermometers.  It is a skeptic plot I tell you!!

So Jeff , what did he base his conclusion that the PCA distributed thermometers of O10 are now “outdated” and “proven wrong” on?

A single borehole temperature reconstruction at a single point……

It was workmanship like that which got me labeled as a skeptic in the first place.

Notes to Real Climate and Orsi:

The PCA method S09 attempted to employ, is about redistribution of thermometer information according to covariance of AVHRR satellite data.   By nature, every temperature station affects every point in the reconstruction.  Kriging the temp stations, is a far more controlled and far more verifiable solution for the same thing and it would produce the same result as O10.   The 3 pc’s of the Steig 09 method “smeared” the thermometer data everywhere, so no matter what is published, S09 methods will NEVER be verified.   S09 can never, and will never, be correct….because it isn’t!  The fact that it is to be cited in AR5 is yet another wart on the last few grains of credibility the IPCC holds.

Does the error of S09 that mean that O10 is right?    No, of course not.  But O10 is very close to actual thermometer results.  This is because in a “skeptic” plot, we cleverly used actual thermometers.  Bunch of morons I say.  This is in direct contrast to S09 which preferred 3 pc’s of highly noisy Satellite AVHRR data WHEREVER available.  That was not a smart plan ….. Um, if you want good results.

Even with enough pc’s as O10 used, there are points in this sort of reconstruction with noisy data, where modes of the PC are a dominant factor in creating the local trends of the plot.  These methods mean that station information can be and IS copied across an entire continent.  This was proven by the S09 cover of nature(Figure 1 above). The trick is to minimize the information bleeding. What this means to me is that I am quite comfortable that the O10 reconstruction will never be proven wrong, not because something as massive and complex as o10 doesn’t contain a boo-boo, but rather because it is an approximation of a field.  The best anyone will ever do — is improve on it.

Apparently, this is something that Steig has never figured out.  He might not ever work it out, but science is a cold sport and my guess is that those who are smarter than him  ….. will.

Other notes of surprise:

What normal thinking person would take a temperature from a lousy borehole and hold that out as superior to an actual thermometer?

30 thoughts on “Proof and Genius”

The Hunter – Joe crime team is now fully exposed. This should be national news and we should be looking impeachment right now. These emails show that Joe Biden and Hunter traded national secrets, and…

Arizona We The People voting integrity organization gave sworn testimony to the state senate on ballot fraud. Links to their presented evidence are here. One claim they made is that you physically cannot verify the…

When I started the Air Vent, back in 2008, one of my main thoughts was to simplify real science for the public. I have a very unique personality regarding learning, in that I’m ridiculously curious…

We can get the naughty Chinese folks back. Earth geology makes it easier for them though. Interestingly, balloons seem to tend to stay in the general latitude region they start from. I think of the…

I don’t like General Mattis, if rumors of his overstepping decisions with respect to Trump are true, he deserves something very severe. I’m thinking apple tree style severe – after a proper trial. However, he…