As I reported before, the US collected record income tax revenues after the tax cut.  This is due to higher real wages as well as more people working.  So lower tax = higher receipts for the federal government.  This is a strong indication of what I’ve written here for a decade now, we are on the back side of the Laffer curve and the government was taking so much it was creating a bad economy.  I reported this in my previous post – refuted indirectly by the NYT despite showing no data.  I’ve found several sources since then which agreed with me.

Today I found one that was apparently inflation corrected and still MORE INCOME TAX REVENUE!!

The bad news is that the government spent it all and more!!! — A LOT MORE.

Link to this source is here.

Graph from the article is here: 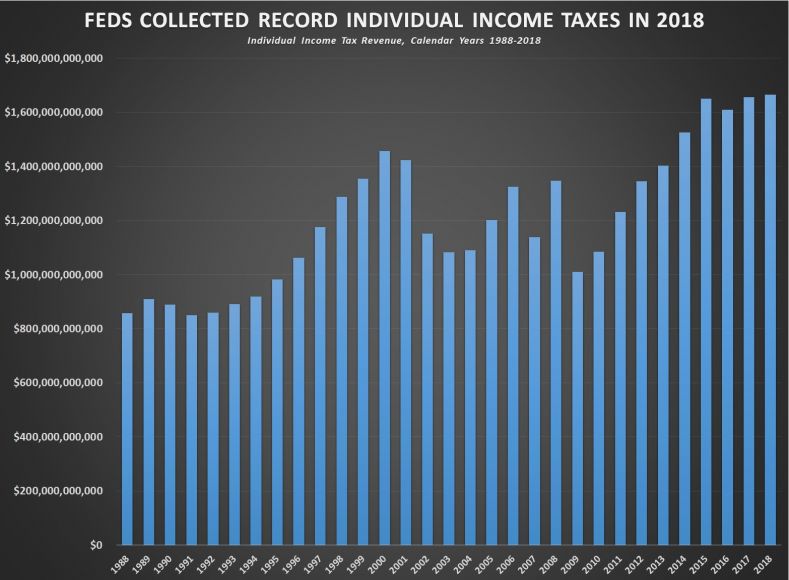 A Novel Method To Produce Votes

Reader “another ian”, pointed to an article from American Thinker which put an article up which appears to have significance in terms of citizen election fraud investigation. After all, we know the leftist FIB and … END_OF_DOCUMENT_TOKEN_TO_BE_REPLACED

Law is a funny sport. Almost continually, we have one political side distorting words and taking things in a context which suits them and another side trying to follow the intent of the law, except … END_OF_DOCUMENT_TOKEN_TO_BE_REPLACED

Election workers taking ballot envelopes. Signatures, addresses and all required information to vote in this or the next election are included on these. There is no legitimate reason I can think of to take them … END_OF_DOCUMENT_TOKEN_TO_BE_REPLACED